Flying in under the radar, Profibre Products – a specialist composite manufacturer of bus, truck and train components – have launched their best-kept secret: the new Stealth Evo XR6 caravan.

Together with a few selected caravan dealers from Natal, Gauteng and the Cape, Caravan & Outdoor Life was invited to attend the launch at their premises in Pinetown, KZN, in early October.

Their first model is an upmarket 3-berth pop-top on-road caravan aimed specifically at the most popular size of caravan range, a gap left largely vacant by shenanigans going on in the industry of late.

When we say “first” caravan, we mean Profibre’s first completed caravan being supplied direct to caravan dealers. We have learned that Profibre has, in fact, been building fibreglass caravan bodies – or more specifically off-road caravan bodies – on behalf of a leading off-road company for some years.

Priced at R285 000, the Stealth Evo XR6 is more expensive than other caravans in this size and category, but this can be justified when one considers the new, revolutionary method of construction.

So much thought has gone into the design that they have managed to design out complications and end up with absolute simplicity in putting this caravan together.

They have introduced a new-found strength in developing a chassis, have added extra body width, and have found some really nice fittings − which include an upmarket Defy twin-burner gas cooker and a new Defy 158-litre fridge freezer.

And, although it has all the trim such as tinted glass windows (no scratching or crazing with age), Venetian-styled window blinds, three rows of LED strip lighting in the pop-top roof, stalk reading lights over the island double bed, a crockery cupboard that is accessible from both inside or outside the caravan, an exterior slide-out galley unit, and really professional-looking locker door mouldings… what really sets the Stealth apart from other caravans is in its construction.

Using their skills in moulded fabrication, they have made sure that there is either no wood, or very little, that could eventually rot in this caravan. The body is made with composites, which means that it has fibreglass outer and inner walls with a medium-density foam sandwich in between.

Wherever screws are used for joins, these go into special steel; and where a panel meets another side panel, it is slotted together and bonded. Plus, there are a few other trade secrets such as the fact that the foam core used in the panels does not absorb water!

The only wood used, apart from that in the furniture, is in the ribs in the pop-top roof to secure the ceiling to the fibreglass roof.

The only “weak” point is a join in the fibreglass roof which needs to be maintained (and may, in time, require re-sealing), but this will be checked during the Stealth’s annual warranty service.

Profibre are actually so confident of the construction that they are considering offering a 2-year water-ingress warranty.

What this all means, is that this caravan could have a very long lifespan: good for trade-ins at a later stage. Time will tell.

WHAT’S IN A NAME

The name “Stealth” is derived from the fact that all suppliers and associated companies were sworn to keep the development of this new caravan confidential.

EVO comes from the word “evolution”, as this product has evolved from fibreglass bodies made for another manufacturer over the years.

While XR6 may bring back memories of Ford’s performance Falcon X, in this case the X is for eXtreme, and R is for taR road-going.  The number 6 relates to future layouts.

The chassis is a result of Profibre’s own CAD-assisted research, and has evolved to take into account towball weight (possibly 90 kg) and weight over the axle.

The result is a fully galvanised 2mm duplex steel chassis said to be three times stronger than mild steel, yet which has a weight saving of 30%.

This chassis is welded and bolted together in critical places, and since the steel is too hard to be drilled by mere mortals, the factory has made provision for bolt-on accessories such as the Ewick caravan mover. Apart from these, there should be no need for anyone to drill extra holes into the chassis; a move which Profibre would not entertain, anyway.

An Al-Ko tow hitch with a breakaway safety cable is used, with a steel brake rod and cables to the Al-Ko suspension. This axle is rated at 1 600kg, even though the GVM is 1 500kg. With a Tare of around 1 100 kg, this leaves you with a 400 kg payload!

Other interesting facts include the fact that there are different corner steadies front and back for levelling the caravan, and that provision has been made to include a jacking point just behind the 14-inch wheel.

It has a canvas surround between the pop-top and lower roof, with the usual fly screen and zippered vents.

In the front nose locker, there is a loose 25-litre water container, a low-capacity electric water pump (which supplies water to the bedside basin as well as to the slide out kitchen), and a 4.5 kg gas bottle.

As a road-going caravan, it will be powered from electricity in a resort, so there is no 12V battery.

A spare wheel is standard, as well as a Rally tent − roof only.

The designers have been very generous in the packing department, and have provided approximately 400 kg payload. 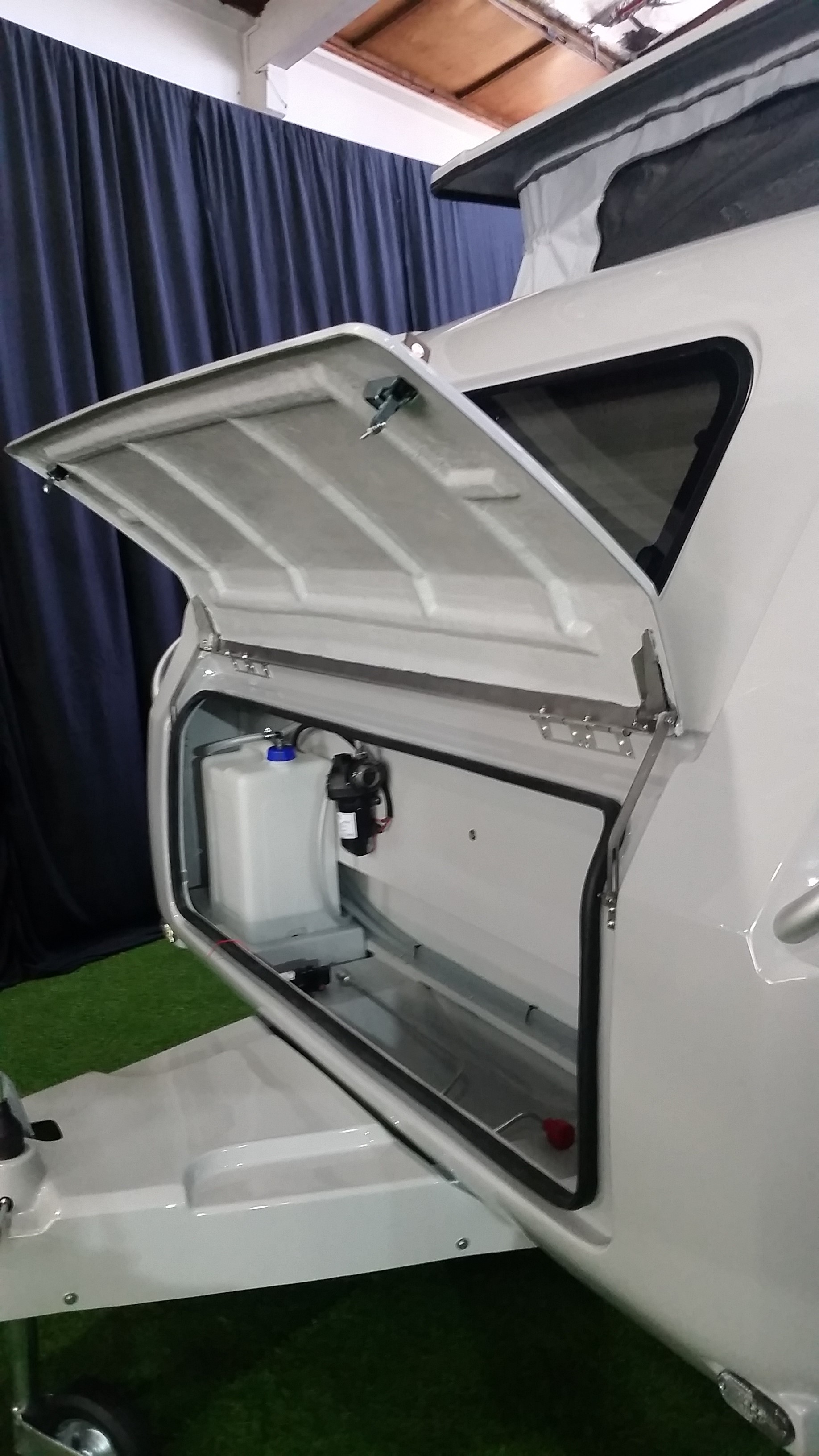 Inside the main body, there are cupboards for food and ancillary items.

Under the lift-up island double bed, there is a hatchway for sliding in a portable toilet.

The rear of the Evo XR6 has a two-seater dinette with a drop-down table to create the third bed. 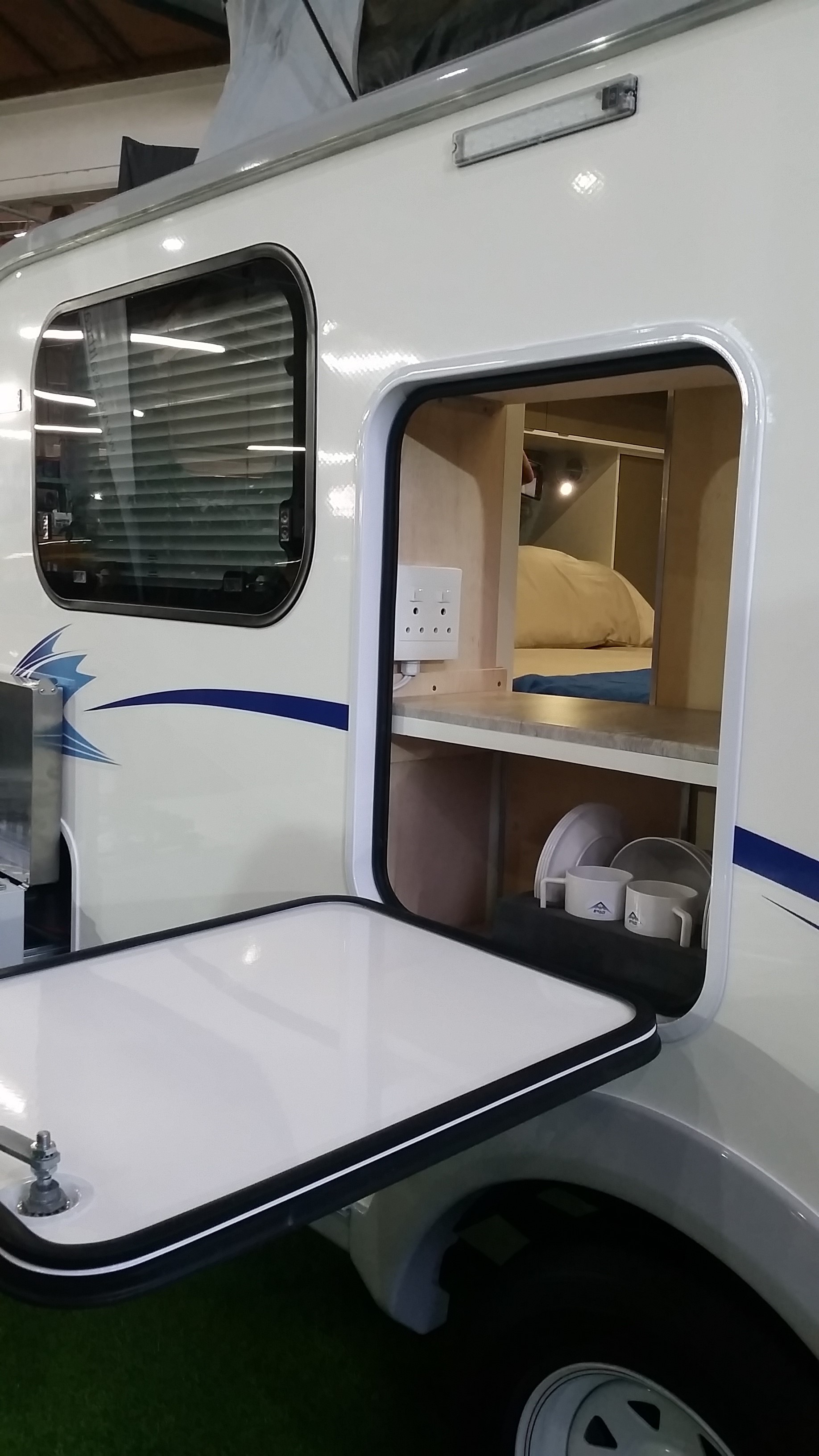 A nice extra feature is the crockery cupboard that is accessible from both inside and outside the caravan.

There are numerous optional extras that one can include, such as an extension table for the slide-out galley, 12 000 BTU air conditioning, 12V conversion for the otherwise 220V fridge, a high capacity 8-litre water pump, a gas/electric geyser, a pocket sprung mattress, an extra bar cupboard on the main door, a microwave oven, a deluxe kitchen stainless-steel sink, a 12V battery pack and Smart charger, and a full tent (Rally standard).

Other optional ideas are being considered, including a bicycle rack, and an annex toilet/shower tent that “hangs off” the rear of the Evo XR6.
By Godfrey Castle 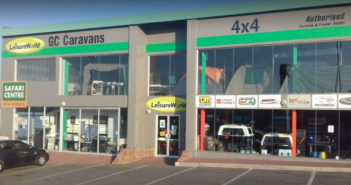 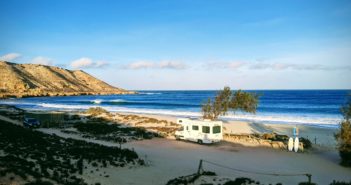 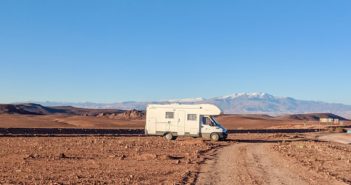 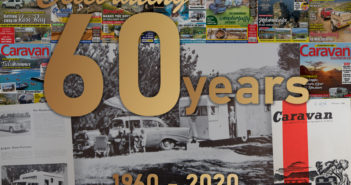 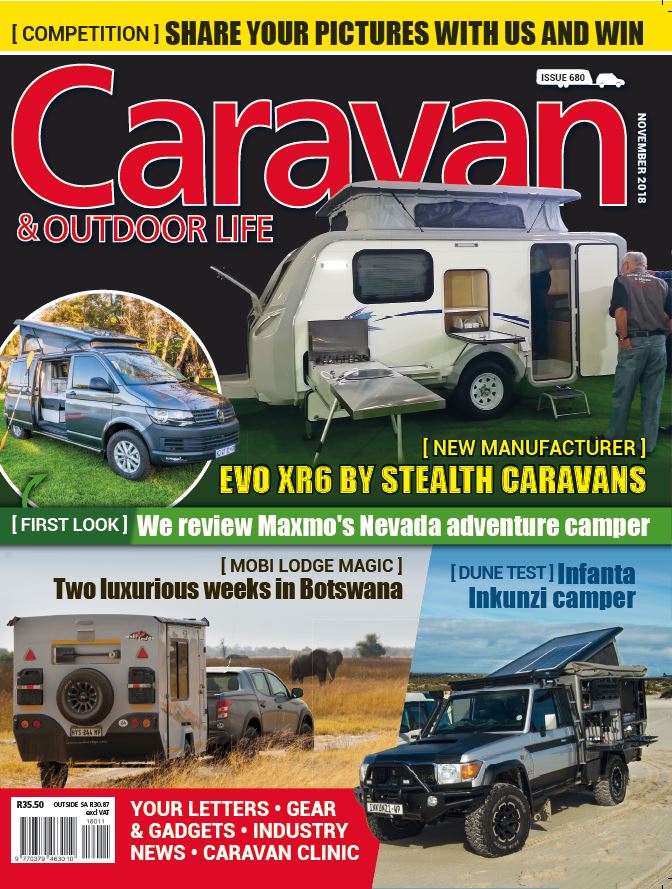