One of the things that I love about working for Caravan & Outdoor Life is discovering caravan and camping sites. On a recent trip through the Eastern Free State near Clarens, I found the Old Mill Drift Guest Farm.

Actually that’s not true. Truthfully I should say I “rediscovered” the Old Mill Drift Guest Farm. Because way back in 2002, I’d stayed at one of the old dressed sandstone cottages down on this farm that was surveyed on Paul Kruger’s instruction back in 1860.

Originally, the farm was known as Beginsel. The land was then gifted by Queen Victoria as a trading concession to a Colonel Hull, who formed a partnership with Colonel Hattingh and opened the mill and trading store in 1913. The mill was a triple-roller wheat mill made by Turner in England, from where it was imported.

The beautiful Old Mill Drift Guest Farm is situated right on the Caledon River, the border between SA and the mountain Kingdom of Lesotho. At the time of my first visit, Old Mill Drift was owned by Bruce Weyer. Bruce, a larger than life character, now owns the Lake Clarens Guesthouse in the town. Back then the Old Mill was still a busy trading store. I’ll never forget the long fully-enclosed fence running from the Lesotho side of the river to the trading store.

I remember the numerous Basotho ponies tethered on the Lesotho side of the Caledon River… the riders bringing bags of maize to be milled and to buy their supplies from the old sandstone trading post.

The mill was first powered by water, followed by steam and finally running of an old tractor’s PTO (power take-off).  Sadly none of the old mill remains, but a new building was built further from the river due to the flooding that occurred.

Bruce sold the farm to Edmund Cressy in 2002 shortly after I stayed down on the river, and today it belongs to Yvonne McCarthy, who has opened up this piece of paradise to campers.

There are only five campsites on this blessed 660 hectares in the mountains and valleys of the Maluti’s. All the sites electrified and with views looking out into Lesotho.

There is a neat central ablution block with an outside scullery with 4 basins and drinkable water. The ablution block is in close proximity to all the campsites.

Befitting a farm with such beautiful horses, the ablutions facilities are named Stallions and Mares. The men’s section consists of three shower and two toilets. The women’s section has a bathroom with a bath and a toilet. Then there’s another toilet and a shower. The facilities were neat and clean.

Another full bathroom in the “main house” very close to the campsite is also open only to guests from the campsite.

There is a wash-up facility with hot water, with two basins and a tap

I sat on the tailgate of the Isuzu D-Max I was travelling in, having my lunch. In the quiet mountain air one could hear the voices of the young herdboys calling from mountain to mountaintop, added to the chorus was  the melodious sound of the cowbells creating the mountain symphony of Lesotho.

It’s an easy drive down off the R711 the tar road that connects Clarens with Fouriesburg.

To get to Old Mill Drift Guest Farm, you take the well-signposted turnoff from the R711 about halfway between Clarens and Fouriesburg.

The road is tarred, with only the last three kilometres gravel. If your car is extremely low I would be cautious driving this section. That said, at the time of my visit, a bridal shower party had all driven in small sedans seemingly without any trouble.

But there’s another very exciting accommodation option for campers, especially with off-road trailers and caravans: You can camp anywhere you like on this farm!

If off-roading is what blows your skirt up, man oh man, there is plenty of that available on this mountain-shadowed farm.

Added to all this is the fact that you can bring your beloved best friend. Yes, camp where you like and bring your dogs. Obviously aggressive and violent big hounds are not welcome, but friendly well-behaved furry friends can come have a ball.

There is so much to do at this farm on the Caledon River. It has some of the best 4×4 trails in the country, superb mountain biking, hiking and horse riding – with the ability to bring your own horses and stable them. The owner, Yvonne, is a horse lover of note.

Pack some lunch and have a picnic under the spreading willows lining the banks of the Caledon River. If you take along a fly rod or spinning rod, you can try and catch some Trout, smallmouth yellowfish, large and smallmouth bass.

For the twitching fraternity there are some 100 species of birds that have been ticked in this area, including Black Stork, Bald Ibis, Cape Vulture, Black and Martial Eagle, Jackal Buzzurd, Rock Kestrel, Peregrine Falcon, and Lanner Falcon.

The Old Mill Guest Farm is really close to the interesting villages of Clarens and Fouriesburg, and The Golden Gate National Park is less than 50 km away – you could even hop across the border into Lesotho.

In closing, I have to say this guest farm ticks all the boxes for me. If big noisy resorts are your thing, then I doubt if it will suit you. But I think the Old Mill Guest Farm rocks.

To make a booking at the resort, fill out the form below.
By Richard van Ryneveld 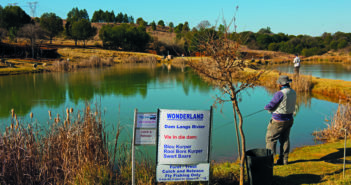 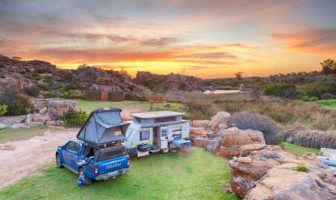 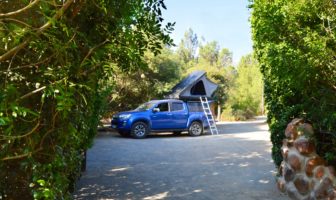