‘What’s wrong with this wood?’ Excuses, excuses, excuses! The truth is probably that you’re embarrassed at having to unpack the fire you’d stacked with such confidence – only to achieve billowing smoke and sap sweating from a hissing heap of logs.

I remember my dad making fires using only a match, newspaper and twigs as tinder. Our country’s original campers and caravaners, the Voortrekkers, didn’t even have matches, and they braaied three times a day for months on end.

What’s changed? Now you’re in a spot, with your flameless fire smoking like a dragon that’s lost its spark. You’re thinking, ‘It’ll have to be Plan B,’ as you reach for your lifeline, those trusty little polystyrene-like white blocks of magic.

But what if, instead of going for that off-the-shelf quick fix, you went the DIY recycling route worthy of the ace scoutmaster hat on your head?

We did some research, spoke to several happy campers and found many ways of using household waste to make effective firelighters. We’ve put a list of the more interesting options to the test so that you can choose how you want to light your next fire with only one strike of a match.

How to make your own firelighters with … Corks + paraffin

Collect corks and put them in paper cups. Fill the cups with paraffin and cover to prevent evaporation. Leave the corks to soak for a few days, checking the level of the paraffin from time to time, and top up if necessary. (The corks are porous and soak up the paraffin.) Remove the corks and seal in plastic bags.

Here’s a different method using corks. Collect old candle stubs and melt them in a pot. (Be careful: molten wax is dangerous.)

Fill paper cups about halfway with corks that you’ve broken, crushed or cut into small pieces, and pour in enough hot wax to just cover the cork. Create a wick or two by rolling thin ‘sausages’ of paper and planting them into the melted wax, with a fair bit sticking out. Once the wax has cooled, remove from the cups and seal in plastic bags.

You need some cotton balls or pads of the kind used with make-up. Work some petroleum jelly into the cotton balls with your fingers and store them in a sealed container or ziplock bag.

Dryer lint does have a use! Those loose fibres, fluff and other bits of material that collect in the filter of a clothes dryer are good for home-made firelighters! Take clumps of the lint and press it into the hollows of an empty egg carton or into paper cups, depending on the size you prefer. Pour melted candle wax into the egg carton or cups to cover the lint. Pop your firelighters out of the egg carton or cups once they have cooled and store them in sealed bags or containers.

Collect your used tea bags and let them dry, then soak them in paraffin or saturate them with melted candle wax. Once they have absorbed the paraffin, or the wax has cooled down, seal them in a plastic bag or an old lunch tin.

Fill paper cups about three-quarters of the way with sawdust, wood shavings or even shredded paper, and again soak in paraffin or douse with melted candle wax. Once the wax has cooled or the paraffin has saturated the wood or paper, close the cups with staples.

Don’t throw them away! Close one end of each roll with a staple or two, prop them upright between a row of bricks or other heavy objects and fill them with sawdust, wood shavings, crushed cork or shredded paper. Pour in hot candle wax, just covering the contents. When the wax has cooled down and is almost solid, staple the open ends closed. The cardboard will burn, serving as a wick, until the contents catch fire, but you can also insert a paper wick. (It may be an idea to soak the finished product in paraffin so that the cardboard burns for longer.)

Use rope – or strips of fabric, cardboard or paper rolled into tiny ‘sausages’ – soaked in paraffin as wicks for your wax-based firelighters, which take longer to catch alight than the paraffin ones. You can insert more than one wick into a single firelighter. Push the wick into the wax, leaving about half sticking out, just before it cools down completely. With the lint firelighters, you can use the tip of a knife or can opener to pick out and expose some of the fibres, which will serve as the wick.

It’s safer to use a double boiler to melt the wax, especially if you’re using gas and therefore can’t control the temperature as easily as on an electric stove. If you don’t have an old double boiler to use, pour some water in a pan and suspend a smaller pot over it using wire coat hangers. This way it’s the steam from the boiling water that melts the wax. But be careful: melted wax is very flammable.

We often don’t think too much about the braai wood we buy in our local shop or at the roadside. I, for one, just check that it looks dry and isn’t too expensive – I hate burning money – then the bag ends up in the trolley. But the choice of firewood is actually a very important preparatory step in a favourite South African national pastime. With the help of Dr Martina Meincken, a senior lecturer at Stellenbosch University’s Department of Forest and Wood Science, let’s shed some scientific light on the different kinds of braai wood.

The availability of firewood differs from region to region – so much so that one could actually write a book on the subject. The Western Cape, where five wood species are popular for braai fires, is an interesting study.

The energy content of the wood and environmental impact of burning are two important aspects to consider. Dr Meincken says the density, ash content and elemental composition are related to the calorific value (i.e. how hot the wood burns). Interestingly, she has found that wood with the highest calorific value is not necessarily the best option for a braai, if environmental factors are also taken into account.

Good braai wood should be dense with a high carbon content, which means it will have a high energy content and burn slowly to produce hot and slow-burning coals, leaving little ash. Burning wood produces many toxic gases including carbon monoxide and nitrogen oxides, which contribute to the greenhouse effect, leading to acid rain, and generally affect our health adversely.

Dr Meinken’s study determined the nitrogen content of wood species, as well as the presence of heavy metals such as aluminium, lead, cadmium and even arsenic, to indicate how environmentally friendly or not a braai fire would be. She says that heavy metals are toxic to humans and the environment.

HOW TO BUILD A CAMPFIRE

There is an art to building a good campfire or braai fire. The wood must be stacked in a manner that allows air to circulate. The goal is to get a good layer of glowing coals and a continuous heat supply.

Stacking the wood properly will help make a fire easier to start and stay burning. Always begin by placing your firelighters and kindling where you want to make your fire. Here are three basic stacking patterns that will help you start your fire and keep it alight. Always remember to keep a bucket of water nearby to douse your fire in an emergency, and never leave your fire unattended.

Place three medium-sized logs on end at equal distances from each other, angled inward at about 45 degrees. Place the logs so that the ends balance against each other to form a rough tripod.

Leave a small space between some of the logs so that you can ignite the tinder when the wood is ready. Once the fire is started, the inner logs will burn down to coals first to form a heat core. As the fire burns, add more logs to the teepee.

Place a large log, eight to ten inches long, at the back of the fire site. Place tinder loosely in front of the log, followed with kindling.

Stack smaller logs across the large log so that the ends are held up off the ground. Position the smaller logs close to each other and over the tinder and kindling.

Light the tinder by reaching under the lean-to. Once the kindling has caught, the fire will reach up between the smaller logs. As these burn down, stack more logs against the larger log in the same manner.

Place two equal-sized logs on either side of the tinder and kindling. Turn two more similarly sized logs 90 degrees to the first ones and lay them across the ends of the logs, just as you might build a log cabin. Place several smaller logs completely across the last two logs to form the ‘roof’ of the cabin.

Light the tinder. As the fire burns, the interior of the cabin will catch, concentrating the heat in the middle of the fire and providing a good core of coals for a particularly warm and long-lasting fire. Add more logs across the last set as needed.

This stack pattern is a flat version of the teepee fire. The logs are laid out in a starburst shape, with one end of each touching at the centre, to burn from the middle. As you need more flame, gently push the logs in deeper towards the middle. This fire is easy to control and is good if you need a slow-burning fire for cooking. 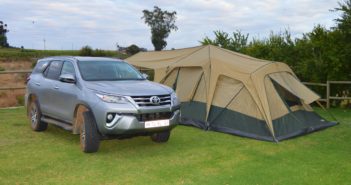 How best to clean your tent 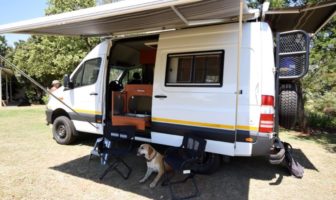 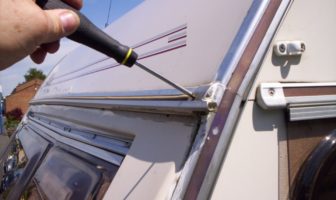 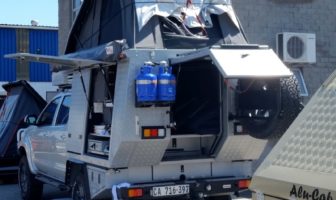