A leopard with her cubs was recently captured on a camera trap by Geo Parks & Sons Timber Merchants in the Garden Route.

Following centuries of persecution, leopard in the Cape area are now restricted to mountain habitat and seeing them outside of national parks has nothing to do with the #lockdown, seeing as leopards have been living in the Cape and Garden Route area long before the lockdown- even long before human settlement. They are among the smallest leopard in the world, with males weighing an average of 35kg, compared to 58kg in Kruger.

Many of us have a misconception that leopards are dangerous to humans, where in fact they are actually shy of people.

Watch the footage of the leopard and her cubs below:

What absolutely wonderful camera trap footage captured by Geo Parkes & Sons Timber Merchants in the Garden Route! This video has also gone viral on Whatsapp with the accompanying info that it was taken in Jonkershoek, however that is not true. While there certainly are leopards in Jonkershoek, this specific clip was not recorded there. Please always make sure to fact check information before sending it on! Read more about leopards and lockdown here: bit.ly/LeopardsAndLockdown

Posted by The Cape Leopard Trust on Wednesday, 22 April 2020

To find out more about the African Leopard, the misconceptions many people have about them- and how we as humans are driving them closer to the edge of extension, click here. 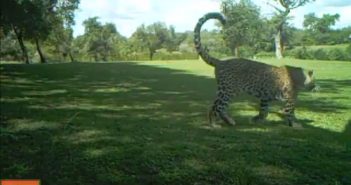 Guess who was spotted at the Skukuza Golf Club? 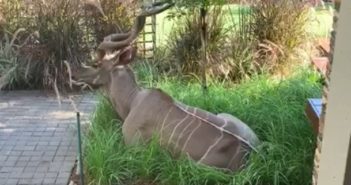 Kudu bull goes sightseeing in Pretoria during the #lockdown 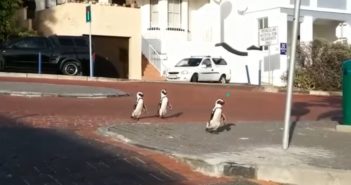 African penguins in Simon’s Town patrol the streets during #lockdown