I know you get double thick cream but do you get double thick butter? Well if you don’t, I’ve just found the recipe. I landed with my backside in the double thickness variety, on a recent trip to the picturesque Gooderson Natal Spa Hot Springs and Leisure Resort up near Paulpietersburg in KwaZulu Natal, a mere four hours from Gauteng.

The double whipping came in the guise of a spanking new Isuzu MU-X seven-seater SUV and my luxurious home on wheels – a spacious 8-metre, double-axle, all terrain Destination Wonder Caravan.

I picked up the caravan from the Destination factory in Meyerton before heading out for the four-and-a-halfhour trip to the resort. I chose to travel via Villiers, Vrede, Memel, Newcastle, Utrecht, Vryheid and finally on to the campsite.

Gooderson is roughly equidistant between Johannesburg and Durban. Winter in this summer rainfall area is not everyone’s cup of tea, but I loved the graphic scenery of the golden winter grass with stands of leafless willows dotted over the endless grasslands.

Just before the small town of Memel, I stopped at the Highland Venison Padstal. Here I got a lekker cup of coffee to go and some of the best biltong outside of the bushveld, for the journey ahead.

A short distance later I found myself slap bang in the middle of the Battlefield routes. Just after turning off the N11 outside Newcastle onto the R34 heading to Utrecht, stands one of the Battlefield Route signs with its lonely black cannon saying O’Neil’s Cottage. I headed on the R34 towards Vryheid and some 6km before I hit the T-Junction on the R33, that links up Dundee and Vryheid, I saw the Battlefield sign: Bloedrivier Poort. I certainly tested the capabilities of the all-terrain independent suspension as I headed down the badly corrugated rural road towards some low mountains. I considered turning around, but after checking that everything was shipshape in the Destination I headed on, finally getting to a signboard pointing up a small farm road heading up to some hills. “What if I can’t turn the big rig around?” I thought to myself. Years ago I visited the Battle of Blood River Heritage Site. Memory suggests it was tar road leading to the monument, not a small back-country gravel road. I would have to research it on the internet when I reached Gooderson.

It was quite a long drive and I was really glad when I finally started down the steep slope to the bridge over the Bivane Rivier, before turning into the short driveway down to the resort. The friendly, welcoming staff booked me in and said I could choose any stand in the camping area.

After following the signs to the campsite, I saw a neat row of new quad bikes and a large colourful signboard advertising the paintball arena and the obstacle course. I stopped the large rig to let two low stomach swinging Mamma and Papa Vietnamese potbellied snorkers cross the drive with their two small offspring. I soon learnt that these friendly pigs, together with a little Shetland pony and the pony’s larger brothers and sisters, were all part of the Gooderson menagerie. That night a big ginger cat introduced itself to my camp. After polishing off his small tin of Glenryk Pilchard in tomato sauce, he sat purring in my lap as I watched the two Egyptian geese land on the small dam in front of my comfortable home. 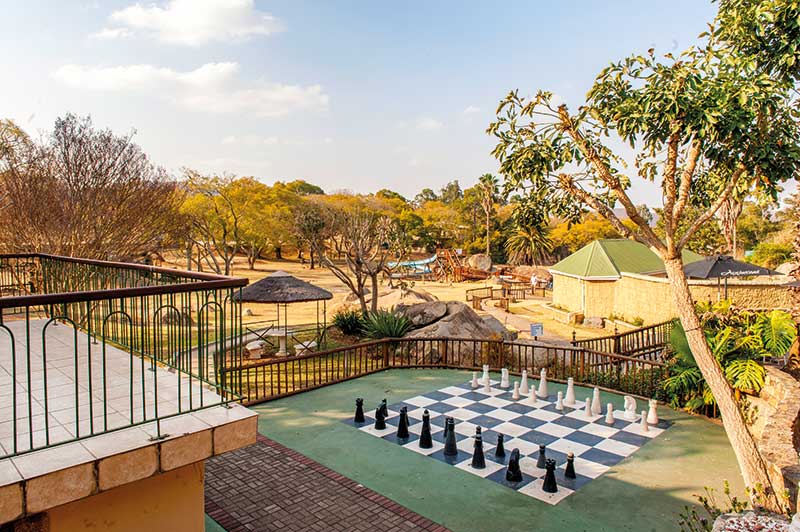 Like all camping trips, I had already made good friends with the Byrne family. The couple, Brett and his wife Cindy and their daughters Megan and her sister Taylor, where on a spiritual journey or pilgrimage if you will. All I know is that I liked this family from the moment I met them. Like me, they had just arrived and were busy setting up camp.

Before I knew it, I was at ‘home from home’ with my own private dam with a view and the rocky krantzes flanking the Bivane River as my front garden.

Later that evening I looked up information on O’Neil’s Cottage and Bloedrivier Poort. I discovered that O’Neil’s Cottage was the place where the Peace Treaty was signed during the Transvaal War of Independence that took place from 1880 -1881. In this small stone cottage (owned by Eugene O’Neil) Paul Kruger, President Brand, Marthinus Pretorius, Commandant Gen. Piet Joubert, Gen. Sir Evelyn Wood and others signed the Peace Treaty after the British defeat at Amajuba. Of course, I was totally off the map with Bloedrivier Poort – it had nothing to do with the Battle of Blood River at all. The Battle of Bloedrivier Poort or Scheeper’s Nek is where, on 17 September 1901, a Boer commando led by Louis Botha thrashed a British contingent led by Major Hubert Gough. This was in the 2nd Anglo Boer war. I had confused it with the Battle of Blood River that had taken place some 63 years earlier on the banks of the Ncome River on 16 December 1838. No wonder the Battle Site route website recommends you don’t do the routes in a haphazard manner, but rather choose an era, war or campaign and then select the sites you want to visit. On my next visit a pre-planned Battlefield trip would be top of the agenda. But there was plenty to do right on my doorstep.

I took a short walk down to the Bivane River early the next morning and sat on one of the ancient Cambrian rocks, known to be millions of years old. Here I pondered the myths and legends of these aeon old hot springs that bubble up through fissures in the earth to make their presence felt in this part of the Bivane River. The early San people believed that warm water that bubbled up in a few specific areas of the river was the work of a large black snake, that hid deep in its underground lair.

In 1888, on the long trek from the Transvaal to Lourenço Marques, a Voortrekker by the name of Oom Piet Wessels discovered the ‘hot spots’ in the river. To mark the warm spots, sandbags were strategically placed and so the five hot and four cold pools came into existence. This was the start of this famous spa. Apparently, the water that rises up through the fault lines contains healing chlorides, sulphates and carbonate, which folklore suggests is good for treating gastric ailments, digestive disorders, biliary, fibrositis, gout, rheumatism and insomnia, amongst other ailments.

I didn’t seem to have any of the aforementioned siektes, but just in case I wallowed in the hottest of the pools like a beached hippopotamus. Luckily, I’d brought my camera and photographed a bunch of kids screaming down the 110 metre waterslide. It is one of the highest waterslides I’ve ever seen! Going up the steep slope where the kids take a walkway up to the top of the waterslide, I got to photograph Denise and Randal Parkhouse as they hugged each other after completing the zipline. The end platform of the zipline is right next to the top of the waterslide. This last section takes you on a dizzyingly high swing over the Bivane River. More my idea of fun, was the hiking trail. Paul and Paula Bezuidenhout and their daughter, Hope, were starting off on the Green Trail. The trail starts right next to the waterslide tower and final zipline platform leading down to the river, before taking one on an easy circular route back to the Resort.

The weekend had arrived, and it became apparent why this is such a popular family destination. Gooderson Natal Spa is totally set up for families. I hung out with Debbie Bekker who looks after the kid’s side of things at the resort. The place was humming with kids. There were kids playing puttputt, others jumping like dervishes on the trampolines while Lucky Sabiya was giving free pony rides on a quiet, plodding, little old Shetland pony. Debbie had minder duties to a team of four kids, all dressed in matching denim dungarees over red T-shirts with matching red takkies. I managed to pin her down when she got the children to sit down at the cafeteria with an ice cream. It turned out this team was a mixture of siblings and cousins, and their moms and dads were enjoying a spa treatment knowing their kids were in safe hands.

I already had my models for the archery and obstacle course photographs. I really enjoyed the company of Taylor and Megan Byrne, and they were both naturals with bow and arrow. And, their clambering over the obstacle course had me tired just watching them. It was so lekker spending time with a family who have decided to opt out of the rat race. Bret, who was in the construction game all his life, went on to explain how he worked such long hours and felt he was missing the joy and privilege of sharing time with his children. Hence Cindy, Brett and the kids, decided to sell their house in Cape Town, buy an old Sprite Sunway and head off into the unknown.

If you ask me what the greatest treasure of camping and caravanning is, I’ll answer unhesitatingly: The people you meet on the journey. Actually, replace people with friends. And these friendships are cemented so much quicker than back in so-called ‘civilisation’.

In the three nights I camped at Gooderson, the Byrne’s joined me on my second night for a braai. After supper the girls sat at the comfortable Destination’s dinette listening to music on my laptop. We sat till the wood finally ran out, before the family walked the short way back to their home. The next evening, I joined the family for a plateful of their special pasta. I thought I could cook pasta, but this was beyond belief. Brett is a keen fisherman and I joined him whilst fishing. I love old things, especially knives, and I saw that he had a wonderful old fishing knife in a beat-up old leather scabbard. “Hey, that’s interesting Brett,” I said. Stamped into the leather was Van Riebeek Festival 1652 -1952. “How curious, I was born in 1952,” I said, and I thought no more about it. Perhaps you might understand how I felt when I got back to the caravan after a wonderful meal with the Byrne’s and there on the table was the knife with a note which read, “I would love you to have the knife.”

I’ll leave you with that wonderful thought as I drove the long way back to Meyerton. 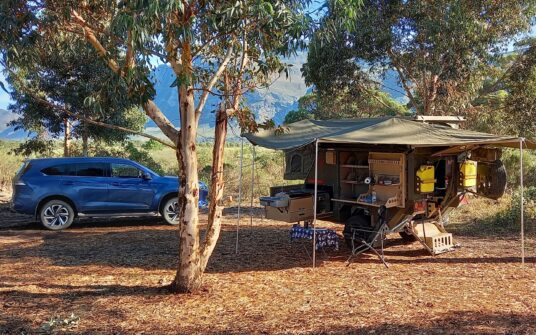 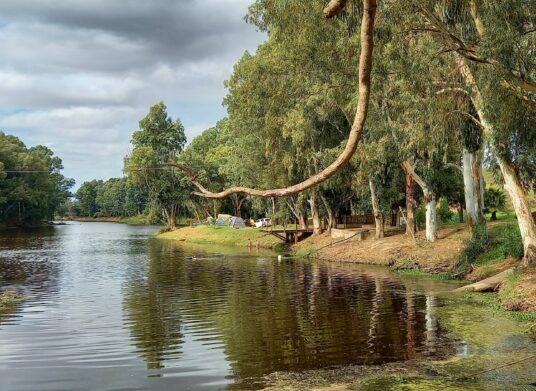 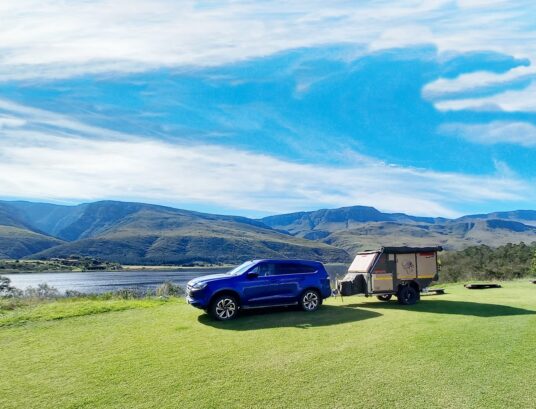 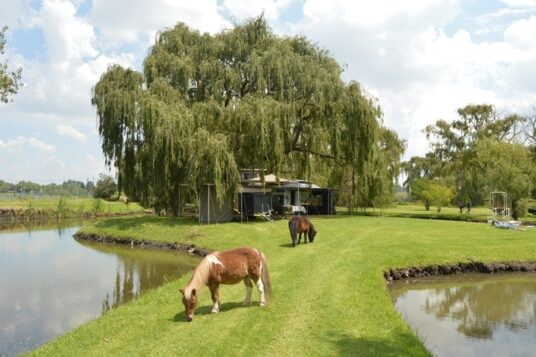