Longer, wider, higher and with increased payload – the brand new Jurgens Ci range of caravans has set the market abuzz since its launch in November 2016. It has been 14 years since market-leader Jurgens has launched a model revamp, and caravan lovers are waiting anxiously to get a look at the new range, reportedly set to launch in February.

And, judging by the reaction from our website and Facebook page, the interest in the new designs is as intense as it is widespread. At the time of going to press last month, information on the new caravans was scarce, largely because half the models (Penta, Fleetline) had not even been built yet. Only the flagship Exclusive and Classique were ready, and those only as prototypes. Furthermore, the only people who were allowed to see these prototypes up close were dealers… and if they insist on feature changes, there could be a whole new ball game!

So, Caravan & Outdoor Life set out to get you every scrap of information on the new range that we could – from first-hand accounts and insider pictures to interviews with senior Jurgens personnel.

When speaking to Clive Cox, Development Manager at Jurgens Ci, we asked him to describe the biggest challenges in designing the new range, taking into account the customer feedback and market trends that must also have affected these new models.

Clive said that there had been a number of challenges to overcome, particularly with the Exclusive, as customers always have high expectations of the flagship of the range. This was why they had decided that it would have to be totally new, from the ground up.

There also had to be a compromise in the end product, as the Jurgens range of caravans is an “international” brand – sold here and in Australia – and the countries have differing legislation and challenges, and the new design had to appeal to two different markets.

The first challenge was the chassis. The 2017 range has a 38mm foam-sandwich floor, instead of a single panel of marine ply screwed to steel chassis members. So, a new chassis had to be developed that would be light, yet strong enough to support the new flooring.

The axle positions on all models have been moved to the best position for the better tow cars, as identified over the years. The new Penta will be the model that most benefits from the new axle position.

After the mechanical details, the next challenge was to adopt a styling that would be fresh and modern. What was settled on, was an adoption of what Clive calls “automotive styling”… it had to be simple, sleek and something that a family would want to own.

Starting with the body shape, there is a freshly-styled fibreglass front and a rather squared-off fibreglass rear. This was for two very specific reasons: Firstly, it provided more headroom in the rear-end bathroom, and secondly, it was the result of legal requirements from Jurgens Australia, which requires a central brake light, positioned high, as well as front and rear marker lights, running lights, and a triple rear taillightcluster at normal height.

The new Exclusive has 15-inch wheels for improved load capacity and availability, and the dropped doorstep has been discarded in favour of a squared-off doorway and a fold-out step. The step is quite wide, allowing for sure-footed entry and departure.

Other under-the-skin improvements include a double layer of aluminium on the roof for strength and insulation, as well as harder 0.7mm aluminium sidewalls. The walls are 38mm thick and are now ‘one piece’ of aluminium, which has a major advantage. With no vertical screws in the outer skin, there is a very much smaller chance of water leaks! The side hatches are a great improvement, in that these have a single outer edge to prevent the ingress of water.

But, the best feature has been saved for last: the overall construction has been designed to combat the water leaks which were a scourge on previous models. To achieve a watertight caravan, Jurgens has redesigned the way in which the walls, front, rear and roof join together. The roof, front and rear panels now overlap the side panel, and screws and add-ons have been done away with. The layman will notice this in the new position of the tent extrusion, which is now positioned on the sidewall rather than on the corner.

‘The furniture inside has been upgraded, and is closer to designer-kitchen quality,’ says Clive. ‘We have touch-sensitive lighting, and plenty of it. There are downlighters, flexible reading lights, ceiling lights, and light above the foldout door step. It’s like Sun City!’

Another big change is that there is no more gas, and no more 12V batteries… these caravans are 220V only. They have larger microwave ovens, a hot-water geyser, and an induction stove, and they come complete with an induction pot and pan. There will be no more running out of gas in the middle of the night, and no problem of wind blowing out flames, either.

Three models, the Exclusive, Classique and Penta, now have outside kitchens… with the removable induction stove! But, for those who like their bacon and eggs cooked in the great outdoors, all models will still have a single gas bottle as standard equipment. It can be used with a variety of appliances.

Apparently, the main reason for moving to 220V only is the fact that these caravans are tar-road units, and intended for camping in easily-accessible sites and resorts where electricity is available.

And, because these caravans are now fully electric, there are switches and plugs that take 15 amp 220V plugs, as well as two-prong sockets for appliances requiring these; and for the techno junkie, there is a satellite plug for the TV, as well as a USB port.

The double bed is bigger than before, at 1 400mm wide and 1 900mm long, and it has been mentioned that the square rear-wall design means more headroom space in the shower cubicle, which is now one piece, GRP-moulded – again, to ensure a watertight compartment.

There are two options for filling the on-board water tank. You can fill it using a siphon method; or, if you are close to a water tap, you can use a high-pressure hosepipe. The high-pressure fitting on the caravan reduces the pressure automatically.

We may be jumping the gun here a bit regarding the lowprofile Penta – but the roof is going to be a great improvement. Watch this space! As products improve, they also become more expensive; however, if you are intending to keep your caravan for the next 14 years, then these models look as if they are best-equipped to last at least that long, thanks to the changes in manufacture.

The industry, along with just about every caravanner, suffered a serious blow in these past months when traffic authorities clamped down on towing weights. Many caravanners saw red when they discovered that the Tare number at which Jurgens had registered their units did not include many basics such as the tent, the poles, etc.

That is why the new Jurgens range will be registered according what they call “True Tare”, which includes everything it has as it leaves the factory – including tent, poles, pegs and ground sheet – and not just what it weighs as it comes off the production line.

Finally, the question on everyone’s mind: ‘What will these new models cost?’ Obviously, since the launch had only prototype models, a definitive final price cannot be set. According to dealers who were at the launch, the new models will be “at least” 15% more expensive than the current units. According to reports, the new Exclusive has been quoted at around R425 000, and the Classique R380 000. No reports have been heard on quotes for the other models, but if one applies the 15% increase, this would put the Penta at R327 750, and the Fleetline at R286 350. 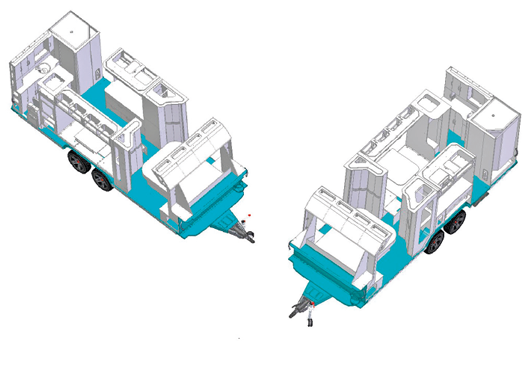 The bathroom is still at the back of the caravan, but has been completely redesigned. When one enters, the shower will now be to the right in the new range, not to the left as in the previous model, and the toilet will be on the left. The hand basin will still be in the middle. In the main area, the fridge has been moved to the right side of the caravan (facing forward, towards the nose), as it is in the Exclusive Deluxe, but will be more to the back, between the bathroom and the dinette area.

The entire interior layout of the Classique has been flipped around. In the bathroom at the back, the shower is now on your right as you enter, and the toilet on the left. In the dinette area, the seats are on the right (looking forward to the nose), with the cupboards on the left. The seating will no longer be in an L-shape; there will be one long seat along the sidewall. The fridge stays on the right side, but moves from its place next to the bedroom, to the back − between the dinette seat and the bathroom. 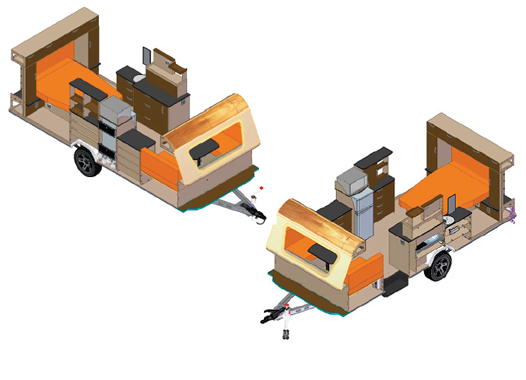 The interior of the Penta has been switched around, as were those of the Exclusive and the Classique, but even more so. The main work-surface has been moved from the right side to the left (when one is facing the nose) and the fridge has also switched sides. It appears that the small hand-basin that used to be next to the bed has been removed, and that the kitchen basin has been moved back to fulfil both roles.

The Fleetline interior has not only been flipped from left to right, but also from front to back. The double island bed has been moved from the back of the caravan to the front − at the nose. This puts the dinette, which doubles as another double bed, in the back. The kitchen basin and the stove move from right to left but swopped around, so that the basin is more to the front and closer to the island bed. The fridge is now also on the right − opposite the door.

NOTE: The caravans in all these pictures are prototypes, and there are planned changes to come for the final models. While Caravan & Outdoor Life has obtained several interior shots of the caravans, Jurgens has decided to only release official interior shots once the correct soft finishes are done. According to our sources, the curtains will definitely charge, and possibly the pelmets as well. The curtains are being replaced with blinds. The cushions used in the vans revealed during the launch (as seen on the pictures in this edition) did not have all the finishings done, such as buttons. 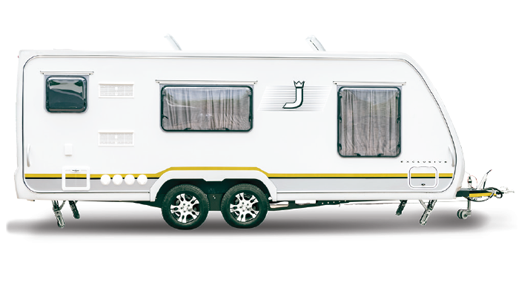 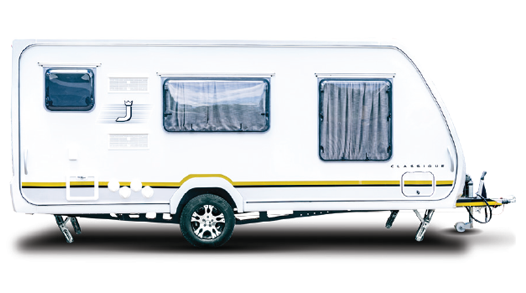 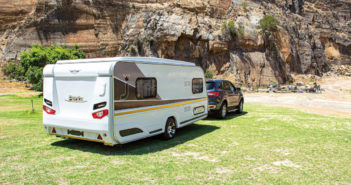 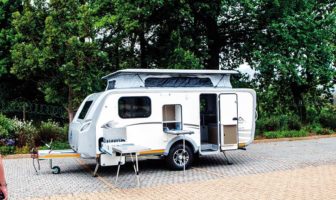 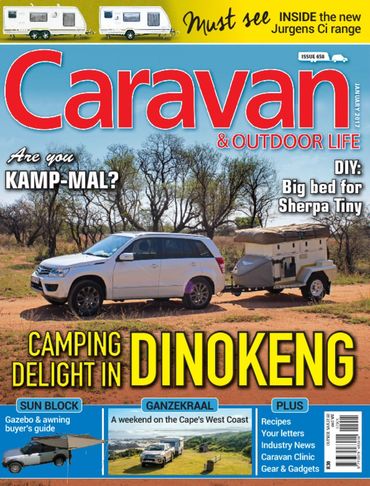